I am sooo excited to finally announce that my digital novelette, “The Shadow Cats,” will be published in e-format by Greenwillow/HarperCollins on July 17. Check out this cover. Isn’t it gorgeous? Greenwillow really knocked it out of the park. 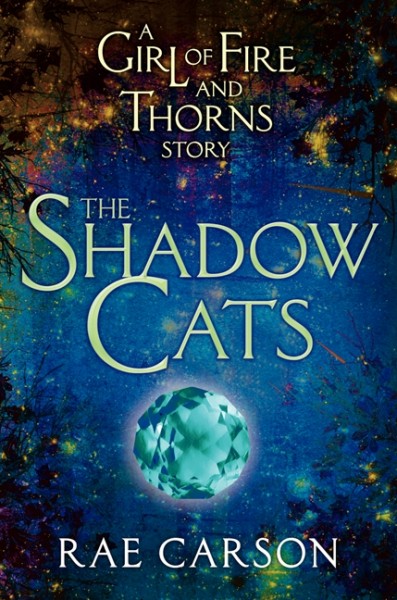 This 54-page story is an official prequel to The Girl of Fire and Thorns. It’s told through the eyes of Elisa’s older sister, the crown princess Alodia.

“Once a century, one person is chosen for greatness. And it was not Alodia.

Alodia is the crown princess of the realm. The sister who knows how to rule, and the one who is constantly reminded that she has not been marked for a grand destiny. But Alodia has plans, and she will be the greatest queen her people have ever known. So she travels–with her hopeless, naïve, chosen sister–to a distant part of their land, to begin to secure her supporters. This region needs its princesses, for it is plagued with a curse. The crops don’t grow, the spring doesn’t arrive, and a fierce jaguar stalks the shadows, leaving only empty homes splashed with blood behind. If Alodia can save them, no one will be able to deny her strength and her sovereignty.

But what she discovers could change the fate of her kingdom, if not her world. And it will most certainly change her opinion of her younger sister.”

So, yeah, it was super fun to get inside Alodia’s head. She remains an important presence in the next two books in the trilogy, so I hope this will give readers a glimpse into what makes her tick and enrich their overall experience.

“The Shadow Cats” is now available for pre-order wherever ebooks are sold. Buy early, buy often! My starving kitties thank you. I thank you. Hope you enjoy!

30 Comments on Introducing “The Shadow Cats!”