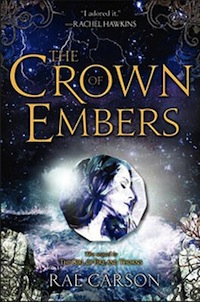 The second book in Rae Carson’s award-winning The Girl of Fire and Thorns fantasy trilogy, perfect for fans of Game of Thrones and Kristin Cashore. Tamora Pierce called the first book, The Girl of Fire and Thorns, “A unique and engrossing read!” A seventeen-year-old princess turned war queen faces sorcery, adventure, untold power, and romance as she fulfills her epic destiny.

In The Girl of Fire and Thorns, Elisa won the war. She saved her kingdom. But no one prepared her for how hard it is to recover from a battle, or to rule a people who still don’t trust her. She’s still fighting—against assassination attempts and more—and her enemies lie both outside her court and within it. So Elisa will cross the ocean in search of the perilous, uncharted, and mythical source of the Godstone’s power. With her go a one-eyed warrior, a loyal friend, an enemy defector, and the man she is falling in love with. A breathtaking, romantic, and dangerous second volume to Rae Carson’s ambitious trilogy. Cinda Williams Chima proclaimed about the first book, The Girl of Fire and Thorns, “I LOVED this book!” and Veronica Roth agreed, saying, “Definitely recommended.”

She does not know what awaits her at the enemy’s gate.

Elisa is a hero.

She led her people to victory over a terrifying, sorcerous army. Her place as the country’s ruler should be secure. But it isn’t.

Her enemies come at her like ghosts in a dream, from foreign realms and even from within her own court. And her destiny as the chosen one has not yet been fulfilled.

To conquer the power she bears, once and for all, Elisa must follow a trail of long-forgotten—and forbidden—clues, from the deep, hidden catacombs of her own city to the treacherous seas. With her go a one-eyed spy, a traitor, and the man whom—despite everything—she is falling in love with.

If she’s lucky, she will return from this journey. But there will be a cost.

Critical Praise for The Crown of Embers

“There are books you like, and books you love, and then there are the ones that make you go past ‘love’ and straight into, ‘I think I may need to marry this book.’ The Crown of Embers was that type of book for me. I adored it.” — RACHEL HAWKINS, AUTHOR OF THE NEW YORK TIMES BESTSELLING HEX HALL SERIES

“Rae Carson has proved she’s a master and has shaken up the YA genre. . . . Nothing is held back.” — USA TODAY

Praise for The Girl of Fire and Thorns: “Fans of Tamora Pierce’s “Beka Cooper” series will find a kindred spirit in Elisa as she experiences great adversity and heart-wrenching loss.” — SCHOOL LIBRARY JOURNAL (STARRED REVIEW)