Once a century, one person is chosen for greatness.

Elisa is the chosen one.

But she is also the younger of two princesses, the one who has never done anything remarkable. She can’t see how she ever will.

Now, on her sixteenth birthday, she has become the secret wife of a handsome and worldly king—a king whose country is in turmoil. A king who needs the chosen one, not a failure of a princess.

And he’s not the only one who needs her. Savage enemies seething with dark magic are hunting her. A daring, determined revolutionary thinks she could be his people’s savior. And he looks at her in a way that no man has ever looked at her before. Soon it is not just her life, but her very heart that is at stake.

Elisa could be everything to those who need her most. If the prophecy is fulfilled. If she finds the power deep within herself. If she doesn’t die young.

Most of the chosen do. 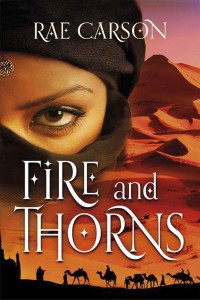 Princess Elisa is a disappointment to her people. Although she bears the Godstone in her navel, a sign that she has been chosen for an act of heroism, they see her as lazy and useless and fat.

On her sixteenth birthday, she is bartered off in royal marriage and shipped away to a kingdom in turmoil, where her much-older-and extremely beautiful-husband refuses to acknowledge her as his wife. Devastated, Elisa decides to take charge of her fate and learn what it means to bear the Godstone. As an invading army threatens to destroy her new home, and everyone at court maneuvers to take advantage of the young princess, Elisa becomes convinced that, not only is her own life in danger, the whole world needs saving. But how can a young girl who has never ridden horseback, never played the game of politics, and never attained the love of a man save the world? Elisa can’t be sure, but she must try to uncover the Godstone’s secret history before the enemy steals the destiny nestled in her core.

A fat princess, a country at war, and a mission from God…

“Elisa is a wonderful, believable hero, the kind that every reader can imagine as herself. I charged through the book in two days, savoring Elisa’s realness and her unique, wonderful world! Engrossing.”
— Tamora Pierce, author of New York Times bestseller BLOODHOUND

More in the Fire and Thorns trilogy…

6 Comments on The Girl of Fire and Thorns